India & the Struggle for Tamil Eelam

[See also We aren't responsible, if Lanka gets split: Vaiko] 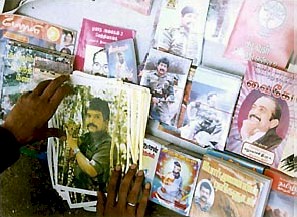 "The impressive rally of Marumazharchi Dravida Munnetra Kazhagam (MDMK) organised to mark its first district conference titled "Tamizhaga Ezhutchi Conclave' and attended by thousands of enthusiastic party cadre on Saturday (1 July 2000) wound its way through the busy streets of this 'Turmeric Town' to the conference venue at Sholar.... The cadre who were braving a scorching sun and a sultry afternoon remained mute and they became enthused when slogans relating to Eelam were raised. The response was in a high pitch. A slogan was raised by youth wing cadre stating that `"Eela Tamizhan pazhiyanal, Vaiko thondan puliyaavan (If Eelam Tamils continue to perish, Vaiko's cadre will turn into Liberation Tigers") Slogans like "Eela Tamizhan sindhum ratham em ratham'' ("The blood shed by Eelam Tamils is our blood''). Kappom kappom Tamizhanai kappom, Kuduppom kuduppom kural koduppom - Eelam malara kural koduppom'' (We will raise our voice for the birth of the Eelam nation) were also heard." .... 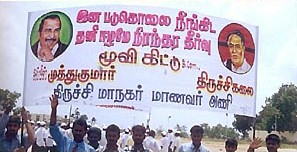 The rally witnessed some youngsters with a ferocious and rebellious bent of mind walking with a picture of LTTE leader Velupillai Prabhakaran in post-card size on their chest.... At the end of the day one got the impression that if Vaiko's idea was to strengthen the party down the line and infuse confidence in the minds of the cadre when the elections are round the corner, he can rest assured that his mission has been accomplished. The rally was definitely a morale booster to the thousands of those who have come here."

However, for the Statesman it was a case of Vaiko walking on edge as supporters hail Tigers. It reported on 2 July 2000:

" A pro-LTTE procession by the MDMK ahead of its two-day conference made a hero out of Velupillai Pirabhakaran here today, throwing to the winds Mr Gopalasamy Vaiko’s promise to the Prime Minister that his party would not embarrass the NDA over Eelam. Youths with Pirabhakaran badges pinned on their shirts and cloth imprints tied on sleeves wound around the town in a large procession to the meeting venue at Solar some four km off, carrying banners that read “let Tamil Eelam blossom and let commander Pirabhakaran rule it.” The marchers warned President Chandrika Kumaratunga the Tigers would win the Sri Lankan war, and called for “the voice lending support to Eelam Tamils to reverberate in all directions”. The “blood spilt by Eelam Tamils is our own,” they said, and declared: “We will voice, we will voice, our demand for Tamil Eelam to blossom.”

And for V. Gangadhar writing in the Hindustan Times on 17 July 2000, North is north and South is south,  the 'double speak' at the MDMK rally at Erode 'is now forgotten' but 'the people of Tamil Nadu have more in common with the citizens of Jaffna and other Tamil strongholds in Sri Lanka, than the UP and Bihari bhaiyas or the Shiv Sainiks of Mumbai':