Three years ago, on April 22nd, the Liberation Tigers of Tamil Eelam (LTTE) hoisted their flag in the heart of what was once one of the most fortified military garrisons in South Asia. The fall of Elephant Pass, described as "impregnable" by a US army officer who visited the garrison months earlier, established the Tigers as the only non-state military force in the world today capable of complex manoeuvre war fighting.

Infantry formations and crack commando units of the LTTE overran the sprawling Sri Lanka army base complex straddling the gate way to Jaffna on 21 April.

On its southern front facing the LTTE’s military formations, the garrison was fortified heavily with three main lines of defence, in the Elephant Pass lagoon, its beach and on the land by the coast. These were reinforced with miles of concrete and steel structures, minefields, layers of concertina, minefields and beds of deadly spikes.

The Sri Lanka army had carefully studied the loopholes and weaknesses in the defences of its camps in Pooneryn (November 93), Mullaithivu (July 96), Kilinochchi (September 98) which the Tigers had exploited when they overran these garrisons; and with advisory input from US and British militaries planned and built a formidable system of fortifications to hold the strategic gateway to Jaffna.

These defences in turn were protected by a large Sri Lanka army camp in Paranthan, structured as a bulwark on the Vanni mainland directly ahead of Elephant Pass (EPS).

The SLA was long criticised by US and British military officers in Colombo for taking a "static approach" in organising the defences of its larger camps in the north. They urged Sri Lanka's military leadership to engage in aggressive patrolling and ambush in a large area ahead of the first flexible, shifting lines of defence. Their suggestions were not ignored when the fortifications of EPS were reorganised and reinforced.

The EPS defence was, above all, designed to make it immune to any form of 'shock and awe' strategy by the LTTE.  The depth of the EPS defences was unprecedented in Sri Lanka’s modern military history.

Its rear - the Jaffna peninsula - was under the SLA’s controls barring covert activities by the LTTE there, which were considered militarily negligible. Three army divisions, 51, 52 and 53, were deployed there, well placed to achieve a concentration of forces in any part of the peninsula threatened by the LTTE.

The garrison had a macadamised Main Supply Route (MSR) from the peninsula’s main town and a contingency MSR along Jaffna Lagoon’s southeastern coast considered ‘totally’ safe.

An alternative to water supply for EPS from the fresh water wells of Paranthan was secure in the rear in Iyakkachchi, miles behind the base. 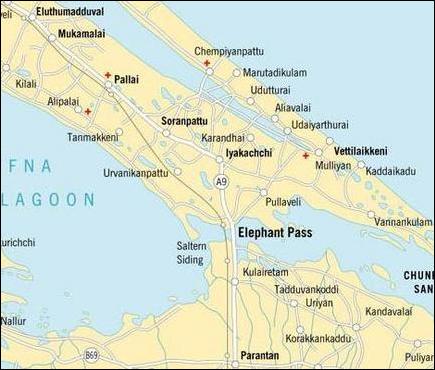 In addition to these, a firing base comprising a dozen pieces of artillery guns was placed in Palali, relatively ‘deep’ in the EPS garrison’s rear, to thwart attempt by the Tigers to penetrate behind the lines to destroy it.

However, the strongest aspect of the ‘depth’ given to the garrison’s defences was the joint Sri Lanka army, Navy base in Kaddaikaadu-Vettilaikerni coast, which was designed to function as the supply route of the last resort, in the event of land and air communications being cut off.

The Sri Lankan military leadership therefore assumed quite rightly, in accordance with their western textbook knowledge of 'depth of defence', that the LTTE was incapable of manoeuvre against 'defence depth' of EPS, involving major sea crossings and the moving of large military formations with adequate speed.

Despite reports by Sri Lankan military courts of inquiry, the SLA hierarchy and its British/US 'defence advisors' were generally inclined to take the view that the Liberation Tigers had, in the past, succeeded in overwhelming SLA camps by launching intense barrages on forward positions and throwing waves of suicidal troops in frontal assaults to break through into and knock out command and communications centres.

This view was mainly promoted by Sinhala defence analysts and reporters who work closely with, or advise, western military and intelligence personnel in Colombo and abroad.

The SLA and its US, British friends obviously little expected the LTTE to possess the capability to co-ordinate a manoeuvre warfare strategy on the scale required to seriously threaten a garrison as large as EPS.

In the 20th century no anti state armed group had ever succeeded in doing so- not even the Viet Cong.

(The battle for Diem Bien Phu was essentially a siege by more than 15000 troops backed by 200 artillery pieces and 20000 regular commissariat men and women, which lasted for more than two months in a terrain that was singularly advantageous to the Vietnamese).

Their view, no doubt was logical given the facts of the war since 1997.

The Tigers lost key population centres in the Vanni (Puliyankulam, Nedunkerni, Kanakarayankulam, Mankulam), more than 3000 troops (wounded and killed) and valuable military supplies in their defensive battles against the SLA's 'Operation Jeya Sikurui' from May 1997 to November 1999.

Furthermore the LTTE had, in 1995-96, lost Jaffna, the organisation's largest revenue base in the island's northeast.

Therefore the SLA came quite logically to the conclusion that the LTTE was incapable of launching and materially sustaining complex manoeuvre warfare to capture the heavily defended parts of southern Jaffna.

In hindsight one may even venture to say that the SLA's confidence in the EPS garrison's 'textbook impregnability', reaffirmed in no small measure by the praises of British and US army officers and diplomats who visited it, also contributed to one of the worst debacles in south Asia's modern military history.

The writing was on the wall when the Tigers overwhelmed the joint Sri Lanka army, Navy base in Kaddaikaadu - Vettilaikerni in December 1999.

Realising that the EPS garrison's vital beachhead was gone, the SLA quickly reinforced the Thalaiyadi camp, north of Kaddaikaadu, with the elite US trained 53 Division and built the Vaththiraayan Box.

This move was still based on the assumption that the Tigers were capable only of frontal assaults but not of amphibious manoeuvre.

(The concept of the Vaththiraayan Box, a heavily fortified rectangular bastion from Thalaiyadi to the Puthukkaattu Junction on the A9, was also based on this supposition)

According to Sri Lankan and standard western military wisdom, it was considered impossible for any LTTE penetration team to survive and pose even a minimally destabilising threat to vital SLA positions in the rear crucial to the defence of EPS.

On 26 March 2000, Col. Balraj, the LTTE's senior military commander, gave the lie to the assumption that no rear depth of defence of a state's conventional army can be seriously threatened by anyone except an armed force with strategic air power, when the Sea Tigers fought their way through a sea barrier formed by a large Sri Lanka Navy flotilla in rough seas to land 1200 troops and their supplies at Kudarappu-Maamunai, in the SLA's rear, beyond the iron clad Vaththiraayan Box.

In the three weeks that followed, the LTTE exploded many assumptions that still inform modern military wisdom by demonstrating it could fight and win set piece battles and hold its ground in the enemy's well-fortified rear without air support.

Few, however, noticed that it signalled a paradigm shift in the conduct of limited wars in the 21st century.