"Deputy Defence Minister Col.Anuruddha Ratwatte, deputising for President Chandrika Bandaranaike Kumaratunga, on the invitation of Northern commander Rohan Daluwatte, hoisted the Lion flag in the re-taken Jaffna town at a simple, but impressive formal ceremony at the auspicious time of 11.52 am Tuesday (5 December)... Defence Deputy Minister Ratwatte inspected a guard of honour at the former Jaffna Fort before hoisting the national flag. Martial music preceded the hoisting of flags."

"Some historians have already looked upon the liberation of Jaffna, Yapa Patuna of ancient fame, as a historical parallel to its re-taking by Prince Sapumal in the 15th century by vanquishing the forces of rebel chief Arya Chakravarti. Prince Sapumal later ascended the throne as King Buvenekabahu IV. A report on the completion of the operation Riviresa will be presented to President Kumaratunga today, official sources said." 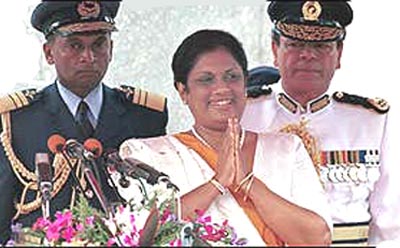 Time Magazine commented on the victory ceremony held on 6 December in Colombo:

"... In a function room in the Presidential Secretariat, (broadcast live on Sri Lanka television), Sri Lanka's leader (President Chandrika Kumaratunga) stood gravely before a line of tough-looking military officers. Deputy Defence Minister Anurudha Ratwatte, fresh from hoisting the flag in Jaffna town, presented her with a scroll rolled up inside a red velvet container. The scroll was dated "full moon day of the month of Uduwap in the year 2939 in the Buddhist Era."

It read, "Your Excellency's rule and authority has been firmly re-established" in the historic city. The territory was not referred to as Jaffna, its official name, but "Yapa Patuna" the term used by conquerors in medieval times.

"To outsiders, the ritual might have seemed arcane and meaningless, but to Sinhalese, who make up three-quarters of Sri Lanka's 18 million population, it was freighted with implications.. Kumaratunga's use of Sinhalese-Buddhist iconography carried a message: she had conquered Tamil lands and defeated her enemies, in much the same manner as Sinhalese kings of centuries gone by...

"Most of her predecessors used similar stratagems. President Junius R. Jayewardene proclaimed himself the 204th ruler of Sri Lanka in an "unbroken line" that included George III and Queen Victoria. In 1990, Kumaratunga's predecessor, Ranasinghe Premadasa, transformed the secular presidential inauguration into a latter-day coronation..."(Reported by Anita Pratap/Colombo - Time 18 December 1995)

"President Chandrika Kumaratunga on Sunday... expressed her gratitude to the Maha Sangha for their advice, support and blessings during the recent military offensive that established the writ of the government in Jaffna. The President made these observations when she visited the Sri Dalada Maligawa (Temple of the Tooth) in Kandy, Sri Lanka's second largest city, to pay homage to the Sacred Tooth Relic of the Buddha.

'Sri Lankan leaders have always visited the Sri Dalada Maligawa to invoke the blessings of the Triple Gem on occasions of national importance. We are following that tradition by paying homage to the Sacred Tooth Relic on this occasion when our security forces have liberated Jaffna ....' she told the Maha Sangha."

The Sinhala Buddhist victory ceremonies, were, ofcourse no empty rituals. They marked the completion of the first stage of Sri Lanka's planned genocidal attack on the Tamil people and set the political stage for President Kumaratunga's continued genocidal onslaught. After all, President Kumaratunga had frankly declared some eight months earlier in her notorious interview with India Today on 30 April 1995::

"Q. Where do you go from here?

A. ...To defeat the LTTE you have to launch an all out attack (which would mean a lot of Tamil civilian casualties) and the place (Jaffna) will be wiped out.

Q. Is that possible? Can the Sri Lankan forces do it?

A. Ofcourse it is possible. That is what the IPKF tried to do."