Home  > Tamilnation Library  > Politics > The Political Brain: The Role of Emotion in Deciding the Fate of the Nation

[see also "You Can't Lump All Terrorists Together" - Hillary Clinton speaking to Michael Tomasky about Iraq, the legacy of the Cold War, Mukasey and ceding executive powers ] 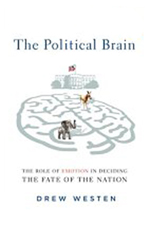 Bill Clinton - "This is the most interesting, informative book on politics I've read in many years...you have to read this book."

Howard Dean - "Drew Westen is a must read...we will win the Presidency if our candidate reads and acts on this book."

Review by Annabel Moorman at Amazon.com

Though there is nothing entirely new here, in this large well researched book Westin manages to draw together several ideas that have been part of our intellectual discourse for some time in an engaging and informative way.

Westin uses 4 themes throughout the book. First, he explains how our human brain evolved over millions of years to make decisions first with our emotions and only secondarily with our logical faculties. This is because we evolved out of other life forms that had a simpler brain structure. The first uses of the brain were for sensation and perception, uses that would tend to keep the primitive forms that were the first conscious creatures alive.

Second, he uses this model of the brain to explain why emotional intelligence controls absolutely every decision that people make, and that this is no where more true than in electoral politics. The dominance of the emotional brain predates and supersedes the thin human veil of reason, and this has proved to be a successful adaptation over thousands of years.

Third, he shows that with the exceptions of FDR and Bill Clinton the democrats have been consistently emotionally tone deaf in their national campaigns, and that they will not be able to win until this is addressed.

Finally, he explores the importance of a consistent emotionally appealing story or narrative to present to the voting public about the values of the party and the candidate. Only after voters understand and resonate with these two things do they care about the issues. The right wing understood this when they supplanted the winning narrative of the new deal with their own narrative of small government and individual hard work. Westin writes this story well, and then shows how the democratic leadership could damage the power of this story and create one of their own that would be just as emotionally compelling or more so.

Throughout the book Westin offers detailed accounts of both successful and unsuccessful campaign strategies. He also describes some major flubs made by democratic candidates and describes what they could have said and done to win the hearts of the people. Westin tells us that a good story will speak directly to the emotional brains of the left wing and moderates alike, but if it does not anger the 30% on the hard right it has not been entirely successful. This is because a good story must knock down the antagonist as it builds up the protagonist. At the same time the democrats appeal only to reason they are also much too timid in defending the very real values that the party stands for.

If Westin is right the democrats need to nominate a truly charismatic candidate and then speak directly to the American heart. It's not enough that the republicans have made a colossal mess. To win, the democrats must offer an emotionally compelling alternative and not be afraid to shout it from the rooftops. Every democrat should read this book.