Arivukathir
- the Science and Education Magazine from the NorthEast - 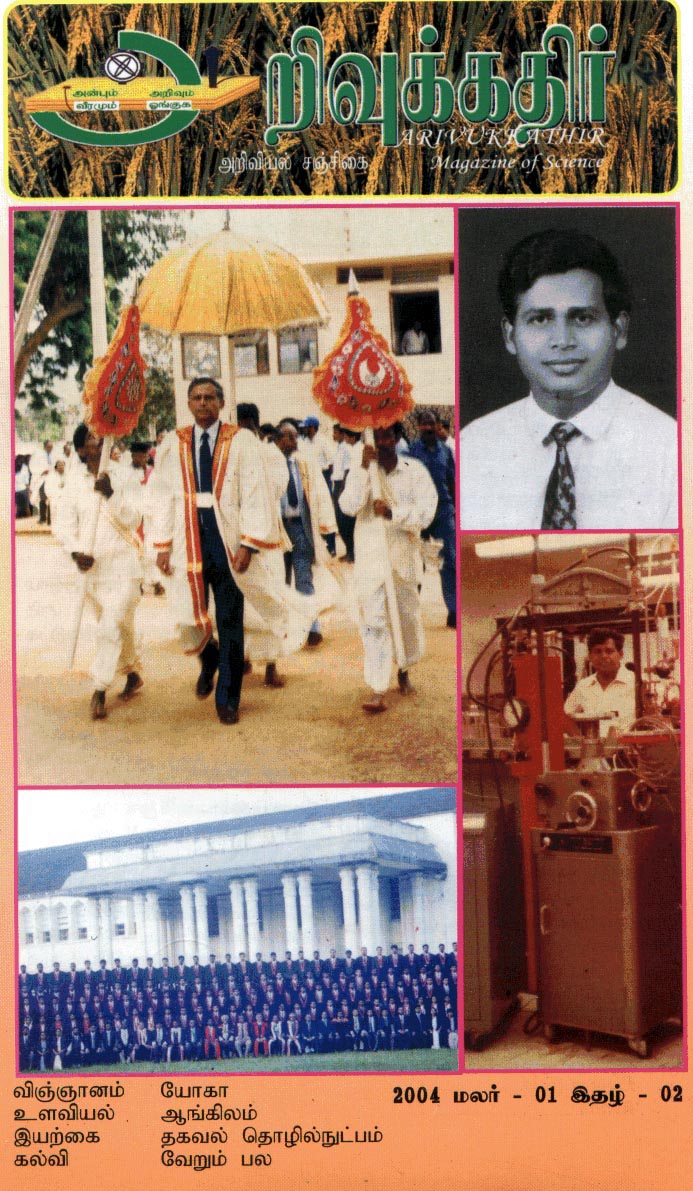 Arivukathir Second quarterly issue of the science and education magazine was released in May 2004 at the University of Jaffna under the patronage of the Vice Chancellor, Prof. Mohanadas. The cover story of Arivukathir honours the late Prof. A. Thurairajah, former Vice Chancellor of the University of Jaffna. His contribution to the field of Civil Engineering and to the education of the Tamil, Sinhala and Muslim youths is unparalleled. On his retirement in 1994, because of terminal illness, he was honoured with the title Mamanithar conferred on him by the Tamil Nation Leader Hon. V. Pirapaharan for his contribution to engineering education and research, and his commitment to education and enhancing the life of the Tamil people.

The First Issue of Arivukathir was released in September 2003. Arivukathir provides a forum for students and teachers to exchange ideas. A special feature of the Arivukathir is that it honours Tamil persons, in each of its issues, who had contributed to the advancement of knowledge and had brought honour to the Tamil people.

The first issue honoured Farmer Mr. K. Muthukumar. His farm yielded the highest yield of rice per hectare in the whole world during 1993/1994-cultivation season. Considering the prohibition of the transport of fertilizers and insecticides to the North since 1990, his achievement gives credence to the age-old practice of organic farming methods by Tamils. It is also a credit to Mr. Muthukumar's ingenuity, skills and hard work.

In 1994, The Tamil Nation's leader Honourable V. Pirapaharan presented him with a gold medal and the title 'King of Farming' for his achievement. Sri Lanka and later the Food and Agriculture Organization (FAO) of the UN honoured him in its 50th Anniversary celebrations held in Thailand in 1995.

The Chair of the Arivukathir Board, T. Gurukularajah, Zonal Director of Education, Puthukkudieruppu, said that the knowledge of all are adversely affected during the two decades of war. Under the current circumstances, accelerated knowledge building activities should be set in motion to bridge this gap. Therefore, a decision was made to print a magazine of science and education and circulate it to all parts of the Island and to Tamil children living in other countries. The Government Agents in Kilinochchi and Mullaithivu Districts are the Patrons. The executive committee members and editor volunteer their time to prepare and publish Arivukathir.

Prof. Thurairajah, after the July 1983 riots decided to leave Peredeniya and return to Jaffna University rather than go to universities overseas. He saw the need of a Faculty of Agriculture in the "Bread Basket of the North and housed it near the Iranamadhu Tank in 1990. In 1994, he appointed me to the Faculty of Agriculture at Kilinochchi. He saw the need for an institute of Fisheries and established it in Jaffna with the help of Norway. Though Tamils contributed the human resources in engineering there was no Faculty of Engineering. He planned one with the approval and Funds from the University Grants Commission and earmarked 100 acres near Murukandhi. However, after his death in 1994 none of the Vice Chancellors followed up the establishment of the Faculty of Engineering. The 12 year embargo that began in 1990 prevented materials from being brought into the North to build the Faculty of Agriculture. But he mad it function with temporary facilities built with mud bricks and thatched roofs. Such was his determination to continue the education of the Tamil youths though the government of Sri Lanka was determined to thwart the efforts of the educators, agriculturists and the general population through the total embargo of the North. Prof. Thurairajah also headed a team of planners, architects and engineers and developed a master plan for the Jaffna peninsula. He also headed the team that prduced the master plan and engineering drawings to desalinate and stop desalination of the cultivatable lands in the Jaffna Peninsula. The embargo stopped that project too. This writer had the privilege of seeing these two master plans. The best way to honour this great person is to make the conditions necessary to implement his far-reaching blueprints for the development of the Peninsula and the Vanni.

The teachers and students in the NorthEast contribute articles to Arivukathir. The editorial board would like to receive articles in science, education, information technology and general topics of interest. Articles in English are also welcomed as long as it is in English that students who are not so proficient in the English language can understand.

The publication of the first issue was with the donation from well wishers. The second issue was published by the sales of the first issue and donations. The Arivukathir Board wishes to be come self sufficient soon. As such, they would like to invite subscription from the Tamil Diaspora. It also welcomes contribution for Arivukathir to establish its own Desktop Publishing activities rather than send the drafts to outside contractors. The Board also would like constructive criticism from readers as to how Arivukathir can be improved in content, form and style.

The yearly subscription for this quarterly is: United Kingdom 5.00 Pounds, Canada $10.00 Canadian dollars, United States US$10.00. India Rs.120.00, Other countries 5.00 Pounds. The subscription includes airmail postage. Those who wish to subscribe to this unique publication from the Vanni and promote its continuous publication can send the subscription by personal cheque, Bank Draft or Money order to: