Now it has become a ‘must item’ in Colombo, Chennai and elsewhere for the ‘analysis peddlers’ and the literate coolies of media moguls to study and check the script of LTTE leader Pirabhakaran’s annual Heroes Day Message. Here is a select list of half-baked opinions which have appeared since November 27th.

For the benefit of above cited time sense-deficient analysts who only scribble about events which happened within the past few days, and refuse to look beyond their noses on the Sinhala-Tamil conflict in Sri Lanka, I provide below the complete text of Pirabhakaran’s 1995 interview to the BBC Correspondent Anandhi Surya Prakasan. Pirabhakaran’s thoughts in this interview also deserve study, in association with his Nov.27th Heroes Day policy statement.

The reasons are manifold.

First, though the name and the sex of the political top dog in Colombo have changed, the political and cultural profile of the incumbent President of Sri Lanka remains the same.

Secondly, Pirabhakaran’s status among the Eelam Tamils has not changed for the past 10 years.

Thirdly, Pirabhakaran’s thoughts on Tamil liberation has not changed for the past 10 years.

Fourthly that the former President Chandrika Kumaratunga was merely a charming conjurer carrying a ‘peace bucket’ over her head had been exposed. In addition, that her deceit in delivering worthless ‘pledges’ for public consumption had been confirmed in other weighty issues such as her ‘pledge to abolish the executive presidency within six months’ as well.

Fifthly and most importantly, by their determination and standing power, Pirabhakaran and LTTE have demonstrated in the past 11 years to the former President Chandrika, her trans-border patrons in the Indian subcontinent and her local political and military cronies, that if she sincerely wished, she could make peace only with the true representatives of Tamil people and that her hand-picked cronies (Lakshman Kadirgamar and Douglas Devananda) were listless fakes. 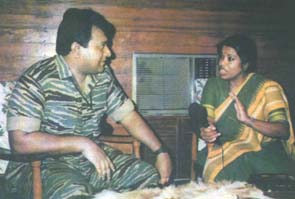 This exclusive Pirabhakaran interview appeared in the India Today magazine of May 11, 1995 (p.97). It began with the following annotation.

“Anandhi Surya Prakasan of the BBC was in Jaffna within 48 hours of the LTTE’s renewal of hostilities. LTTE supremo Vellupillai Pirabhakaran, who rarely grants interviews to the press, agreed to meet her at one of his camps. In military fatigue with a black cord holding a cyanide capsule around his neck, and surrounded by bodyguards, he remained unfazed by persistent questioning on why the LTTE decided to unilaterally withdraw from the peace process. The exclusive interview, in Tamil, was recorded on tape. Excerpts:

“Interviewer: Why did you decide to withdraw from the peace negotiations at a time when there was hope that peace will be restored in the north?

Pirabhakaran: We made this painful decision at a time when our people had lost all hope. In the beginning, we entertained hope that the Tamil national question would be resolved through political negotiations. The Tamil people have been subjected to enormous suffering as a consequence of the economic embargo, fishing bans and the blockade on traffic imposed by the previous government. We requested nothing other than the removal of these bans. Instead of viewing these issues as problems of the Tamil people, the Government took them as specific demands of the LTTE. Furthermore, we were told that any attempt to resolve them would spark off military repercussions. We pointed out that the continuation of the peace negotiations would serve no purpose if the problems of our people were not resolved. The Government assured us that it would remove the bans. We extended our deadline by three weeks. But the Government delayed the implementation of its decisions. It is because of this that we and our people have lost faith in Chandrika’s Government.

Interviewer: Why did you decide to discontinue the peace negotiations even though President Kumaratunge lifted the economic embargo and offered several concessions?

Pirabhakaran: Giving pledges and implementing those pledges are two different things. It is true that President Chandrika gave us pledges. But she has not taken constructive measures to implement them.

Interviewer: Shouldn’t you have been a bit patient since the delay could have been caused by administrative hurdles?

Pirabhakaran: We reached the brink of tolerance. The Government dragged its feet for more than six months. If there was a genuine will, the Government would have lifted the bans and proceeded with the implementation within 24 hours.

Interviewer: What do you feel about the decision to reimpose these bans?

Pirabhakaran: It has made one thing very clear; as far as the Tamil issue is concerned, there is no fundamental difference between the present Government and the UNP regime.

Interviewer: Several foreign governments have condemned you for terminating the peace negotiations.

Pirabhakaran: We are fully aware that the international community is genuinely concerned about the Tamil issue and wants a political settlement. Some foreign countrieshave chosen to condemn the LTTE on the basis of the one-sided story provided by the Government before studying the issue in depth.

Interviewer: Chandrika has made it clear that she is determined to pursue the peace process with or without the cooperation of the LTTE.

Pirabhakaran: If it is practicable to achieve peace without the cooperation of the LTTE, let her continue her effort.

Interviewer: The International Secretariat of the LTTE in London issued a statement recently that the Tigers have not closed the doors for peace. What steps do you expect the Government to take?

Pirabhakaran: Our doors for peace are still open. We are dissatisfied and disillusioned with the Government approach but we haven’t lost hope. If the Government makes favourable decisions on the issues we raised, we will be prepared to cease all hostilities and return to the peace process.”

Though Pirabhakaran and his main Sinhala antagonists remain the same, one essential ingredient has changed at the ground level. A de-factor Eelam has become a reality. And this has been grudgingly by Sinhalese academics in their treatises, even if such treatises spew crypto-racism against the LTTE. I provide two examples.

Purnaka de Silva had written in 1997 (when LTTE was in the thick of its confrontation against the Sri Lankan army) as follows:

“However unpalatable it might be for nationalists of the majoritarian variety (which includes majority Sinhala-Buddhists and minority Sinhala-Christians) or their collaborationist-nationalist Tamil paramilitary allies – the ground reality is that the separatist-nationalist LTTE has de facto control over land and resources (both human and material). Moreover, substantial popularity and sustenance from among a largely chauvinist, (Jaffna-centric) Tamil diaspora that is plugged into an efficient global support network, helps the LTTE to solve logistical problems, re-supply its arsenal and access new technologies of warfare…” [Futures, 1997, vol.29, pp.971-983]

Recently, after the 2002 Ceasefire came into existence, Jayadeva Uyangoda had observed:

“Whenever the LTTE established control over civilian populations in the North and East, they also established primitive institutions of governance and administration in order to maintain public order, taxation, social welfare, policing and crime control, administration of justice and imprisoning convicts and political opponents, provision of health and educational facilities. These were institutions of an emerging state that appeared to function at a rudimentary and underdeveloped level, yet with deadly efficiency in ensuring social control, mass domestication and social obedience. The LTTE holds the view that this parallel state, however incomplete or deformed it may appear, represents the key ‘historical achievement’ of the Sri Lankan Tamil nation. In the LTTE’s understanding, it is the state that has grown out of the Tamil nationalist struggle for sovereignty. Its dismantling and subsequent replacement with the institutions of the Sri Lankan state would amount to dissolving the most important gains of the 20 years nationalist struggle of Sri Lankan Tamils. From the LTTE’s perspective, any settlement to the conflict will have to grant legitimacy and acceptance to their institutions and structures of state power in the North and East. Being a militarily unvanquished minority nationalist movement, the LTTE can hardly be expected to welcome the extension of the failed Sri Lankan state to what the Tamils consider as their ‘homeland’…” [Futures, 2005, vol.37, pp.959-988]

This is the ground reality in 2005, earned by the collective energy and sacrifices of over 17,900 young Tamil men and women, against heavy odds. Sri Lankan state, enshrined by the Sinhala-Buddhist Constitutions of 1972 and 1978, has failed miserably. Eelam has arrived as a de-facto state. This is the political legacy, or epitaph, of President Rajapakse’s immediate predecessor. Pirabhakaran will not step back.