Statement by Mr. Anton Balasingham,
Chief Negotiator of the Liberation Tigers of Tamil Eelam (LTTE) at the Oslo Conference 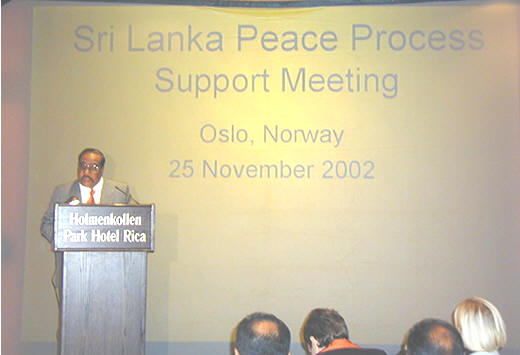 It is a privilege and honour to be invited to address this prestigious conference on behalf of the Tamil people of north-eastern Sri Lanka. I sincerely thank the Royal Norwegian Government for convening this conference; it has provided a forum for the parties in conflict to bring into focus to the international donor community the urgent and critical humanitarian needs of the war affected people.

As concerned nations committed to peace, political stability and economic prosperity in South Asia, you will certainly be eager to know the reality of the current situation and the existential conditions prevailing in the war affected region of northeastern Sri Lanka.

The most remarkable achievement of the negotiating process is that the ethnic war that ravaged the island for nearly two decades, has come to a halt and a stable peace is firmly established on the ground. The parties in conflict have ceased violence under the truce agreement and the guns are silent. The cease-fire agreement, with an effective international monitoring mechanism, has held for the last nine months without any serious violations. A de-escalation process is set in motion to systematically reduce the tensions caused by intense military occupation. Conditions of normalcy are slowly returning to the northeast of Sri Lanka, the region that bore the brunt of the brutal war.

The formal peace talks that commenced on 16 September have made considerable progress with substantial gains. The mode of dialogue has helped to foster friendly inter-personal relations that strengthened mutual trust and confidence. This congeniality promoted co-operation and accommodation. Adopting a realistic, pragmatic and conciliatory approach, the negotiating teams we able to resolve several thorny issues and the talks advanced significantly. The most positive outcome of the negotiations has been the establishment of committees to deal with the urgent issues of restoring normalcy and improving the security situation in the northeast and to rehabilitate the internally displaced persons. These committees are already operational and are addressing critical issues. A political affairs committee has been set up to explore models and systems of governance to formulate a framework for political settlement. This committee has also become functional. The sessions of talks held so far have clearly demonstrated that the protagonists are earnest and sincerely committed to resolving all issues – peripheral and fundamental – that underlie the ethnic conflict through peace negotiations.

As the negotiating process moves forward with a clear vision and strategy to consolidate the current peace and to seek a permanent solution to the ethnic conflict, there are growing expectations and hopes among the war affected civilian population that their urgent existential needs and wants will be addressed and redressed without delay. For the suffering masses, peace and negotiations have little or no meaning unless they gain the peace dividend in concrete monetary and material assistance without delay. The savage war that ravaged the Tamil homeland has created enormous hardships and monumental humanitarian problems. If the hardships of the people are not remedied and their humanitarian needs are not met, the momentum, the optimism and the confidence that arose from the peace process will be severely undermined.

Please permit me to present here, as briefly as possible, the scale and magnitude of the catastrophic disaster that befell the Tamil people as a consequence of the horrendous war. Since I have lived and worked in the war zones of northern Sri Lanka for years, I feel myself qualified to depict the objective reality of the conditions of life in the Tamil areas.

The northeastern region of Sri Lanka, particularly the northern province, has been the war zone where ferocious battle raged incessantly for nearly twenty years. The conflict arose as a consequence of oppression and alienation of the Tamil people from effective participation in the democratic system of governance. The Tamils also faced discrimination in the allocation of resources and opportunities. As conditions of state oppression and violence intensified the Tamils resorted to armed resistance. In a determined effort to destroy the Tamil resistance movement and to subjugate the Tamil homeland the previous governments of Sri Lanka unleashed an endless series of military offensive operations with massive firepower.

The consequences of such military engagements were disastrous. Ancient cities, historical towns and villages that were dear to our people were razed to the ground. The destruction of Tamil property is immeasurable. Those of you who have traveled across Vanni along the A9 highway to Jaffna would have observed the scale and magnitude of the destruction of the built-up areas. Some devastated ghost towns invoke the memories of the tragic scenes of the Second World War. The Tamil civilian causalities of the war have been extremely high. More than sixty thousand Tamil civilians perished in the war. The aggressive nature of the war uprooted huge Tamil populations from their traditional villages and towns. Nearly a million people became internally displaced. Several thousands fled to India and abroad. There were serious violations of human rights in the military occupied Jaffna including the disappearance of several hundreds of persons.

Though the armed conflict has come to an end, the tragic conditions created by the war in the northeast continue to cause enormous suffering to the civilian population. The internally displaced are still languishing in refugee camps and welfare centres in appalling conditions. Those who have returned to their damaged or destroyed homes face a miserable existence without proper shelter. The poverty and unemployment in the Tamil homeland is pervasive.

The war has systematically and effectively destroyed the social and economic infrastructure. The fertile agricultural lands have been turned into minefields and therefore abandoned. It is estimated that anti-personnel landmines numbering over two million are littered around the civilian environment in the north, posing a major threat to life. The task of de-mining has become crucial as huge populations await resettlement in the environment infested with anti-personnel mines and unexploded ordinances. The war as well as the economic embargo that was imposed on our people by the last government has seriously undermined the agricultural and fishing industries that form the economic foundation of the Tamil nation. The war has crippled the Tamil national economy and shattered the livelihood of the Tamil civilian masses. The people of the northeast are the real victims of this brutal war and therefore they deserve urgent and immediate assistance.

You are well aware that the Sri Lanka government, faced with a critical economic situation, cannot undertake the immense task of rebuilding the war damaged economy of the northeast. Resettlement, rehabilitation and reconstruction constitute a monumental endeavour; the cost of such an enterprise is beyond the internal resources of the government. Therefore, both the parties have decided to seek the assistance from the concerned international governments. The Sub-Committeee for Immediate Humanitarian and Rehabilitations Needs of the Northeast, constituted by the representatives of the Government of Sri Lanka and the Liberation Tigers of Tamil Eelam, is making a joint appeal to the international community specifying the central areas of concern and emphasizing the urgent and critical needs.

As we continue to engage in the difficult task of resolving the complex issues underlying the protracted ethnic conflict, we urge the international governments to offer substantial financial assistance for the resettlement and rehabilitation of the war affected people in the northeast. This assistance should reach our people without delay as tangible benefits of the peace process. Concrete international assistance at this critical stage of negotiations will demonstrate the international political support for the peace process. International backing is crucial at this juncture to silence the subversive elements that are opposed to peace and ethnic reconciliation. Such a gesture will generate confidence among the people, create a positive atmosphere and help to advance the negotiating process towards the goal of permanent peace.

We are conscious of the fact that the international community, particularly the donor nations, is fully supportive of the current peace process. They strongly advocate a negotiated political settlement to the ethnic conflict.

On our part, we can assure the international community that our organisation is sincerely and firmly committed to peace and negotiated political settlement. We will continue to make every endeavour to advance the negotiating process towards its ultimate aim of finding a permanent solution to the Tamil national question. As solemnly pledged in the truce agreement, we will not resort to war or violence. We fervently hope that the Sri Lankan armed forces will also abide by that commitment. Both the parties have realized the destructive nature of war. There is no need to recourse to violence if our people are not subjected to repression, if the will and aspirations of our people are respected, if the political conflict is resolved by political negotiations. We pledge that we will strive our best to avoid all possible conditions of conflict and pursue the path of peace with commitment and dedication, until we establish a permanent peace and a permanent solution to the ethnic conflict.