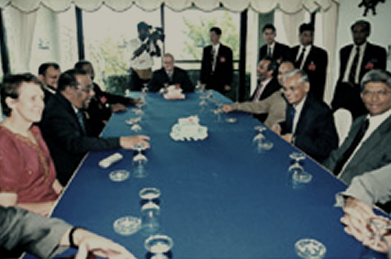 "Please permit me to express my sincere thanks to the Government of Thailand on behalf of the Tamil people of Sri Lanka, for offering your beautiful country as the venue for this historic peace-making event. We appreciate the gracious hospitality and wonderful conference arrangements provided here. We are happy and confident to engage in a constructive peace dialogue in this serene environment.

May I also express my sincere compliments and congratulations to the Government of Norway for its success in accomplishing the difficult task of bringing the principal protagonists - the Liberation Tigers of Tamil Eelam and the Government of Sri Lanka - to the negotiating table. The Tamil people are grateful to the Norwegian peace envoys for their dedicated and persistent endeavor to bring an end to the armed hostilities and for creating a congenial atmosphere of peace and normalcy in the island. The task of building a permanent peace and reaching a final settlement to the ethnic conflict may be difficult, challenging and time consuming. Nevertheless, we are confident that with the able assistance of the Norwegian facilitators there is a possibility for the peace process to succeed.

We are optimistic that the peace talks will succeed because both Mr. Velupillai Pirapaharan, the leader of the Liberation Tigers, and Mr. Ranil Wickramasinghe, the Prime Minister of Sri Lanka, have a genuine will and a firm determination to resolve the conflict through the process of dialogue. As far as the Liberation Tigers are concerned, I can assure you that we are seriously and sincerely committed to peace and that we will strive our utmost to ensure the success of the negotiations. We are well aware that there are powerful political forces in southern Sri Lanka who are irrationally opposed to peace and ethnic reconciliation. Nevertheless, we are confident that the talks will progress successfully because of the fact that the principal parties in the conflict as well as the overwhelming majority of the people of the island want peace and peaceful resolution of the conflict.

Since we are required, at this inaugural function, to keep our statements brief, I do not wish to dwell in detail or in depth on the historical evolution of the ethnic conflict in Sri Lanka. The Tamil struggle for self-determination has a lengthy and complex history, the last two decades of which were characterised by a brutal and savage war. All previous attempts to seek a peaceful negotiated settlement to this intractable conflict ended in fiasco. Though the leadership of the LTTE had, on several occasions, opted for cessation of hostilities and peace talks, the previous government rejected our conciliatory gestures and intensified the conditions of war that caused heavy loss of life and monumental destruction of Tamil property. The intransigence of the previous government could only be attributed to its incredible military theory that war begets peace and political solutions can only be realised by military means. By practicing such an absurd notion the last government of Sri Lanka plunged the entire country into the abyss of social and economic disaster.

The situation has radically changed with the assumption to power of the new government with the overwhelming popular mandate for peace and negotiated political settlement. The new government reciprocated positively to the unilateral cease-fire declared by our liberation organisation at the end of last year. It was at that stage the Norwegian facilitators were able to intervene constructively and work out a comprehensive cease-fire agreement. A mutually agreed cease-fire agreement with international monitors from Nordic and Scandinavian countries came into effect in February this year.

The most encouraging aspect of the current situation is that the cease-fire has held for the last seven months, without any serious violations. In this context I wish to compliment the foreign representatives of the Sri Lanka Monitoring Mission for their dedication, commitment and impartiality in ensuring the smooth implementation of the truce agreement.

Peace and stability are being restored in the island for the first time after two decades of sustained and relentless war that has torn the country apart. This positive atmosphere of peace has brought a sense of relief, hope and confidence to all major communities living in the island: the Tamils, the Sinhalese and the Muslims. A firm foundation has been laid for peace negotiations between the principal parties in conflict.

Normalcy of civilian life is slowly and systematically returning to the northeast of Sri Lanka, the homeland of the Tamils and Muslims, the region that has faced the brunt of the armed conflict. The north has suffered the most horrendous impact of the war, where the entire civilian infrastructure has been destroyed, where thousands of civilians have lost their lives, where one million people are internally displaced. The economic embargo imposed on the Tamil people for the last one decade has had a devastating effect on their social and economic life. This economic strangulation subjected our people to extreme poverty and severe deprivation.

There is an urgent need for relief and assistance to the war affected people. Immediate steps should be undertaken without delay, to embark on a comprehensive program of resettlement, rehabilitation and reconstruction. This monumental task cannot be undertaken without the help and assistance of the international community. The concerned international governments, who have been supporting a negotiated settlement to the Tamil national question, should contribute generously for the reconstruction of the war-damaged economy of the northeast. Improving the conditions of existence of the war affected people and effecting normalcy, congenial for their economic revival, has become a necessary and crucial element in advancing and consolidating the peace process.

Over and above the intricate questions of conflict resolution and power sharing, the people expect a peace dividend; they require immediate relief to resolve their urgent, existential problems. Therefore, the peace process cannot be undertaken in isolation without taking parallel steps towards the economic recovery of the suffering population. The leaders of the Sri Lanka government have expressed a desire to transform the island into a successful Tiger economy. We appreciate their aspiration. Such an aspiration can best be realised by embracing the Tamil Tigers as their equal partners in the task of economic reconstruction of the country. The LTTE is the legitimate and authentic representative of the Tamil people.

We have lived, fought and suffered with and for our people throughout the turbulent times of the war. We have a comprehensive knowledge of the socio-economic needs confronting the Tamil people. We have built an effective administrative structure for more than ten years which has sustained the social cohesion and law and order. Therefore, it is crucial that the LTTE should play a leading and pivotal role in administration as well as the economic development of the Northeast.

The deepest aspiration of our people is peace, a peace with justice and freedom; a permanent peace in which our people enjoy their right to self-determination and co-exist with others. Peace, stability and ethnic harmony are the foundations upon which the economic prosperity of the island can be built. Let us strive, genuinely, with hope and confidence, to consolidate these foundations at this forum to bring a peaceful and prosperous life to all peoples in the island. "