The Sri Lankan army lost several square miles of territory to the Liberation Tigers and suffered heavy casualties in the fierce fighting that erupted this afternoon and still continues ferociously in the Thenmarachi sector of the Jaffna peninsula. Vast tracts of territory in the Massar and Soranpattu areas between Pallai and Yakachchi have been brought under the control of the LTTE. 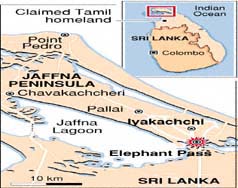 The combat formations of the Liberation Tigers of Tamil Eelam (LTTE) launched a major offensive thrust in the army controlled areas between Pallai and Yakachchi around 1 o’clock this afternoon. Having wiped out several kilometres of the front defence lines of the Sri Lankan troops in the Maser and Soranpattu areas the LTTE forces are advancing deep into the area.

Reports from the LTTE field commanders confirm that the LTTE’s offensive operation has been successful and heavy fighting still continues in that sector. In a meticulously planned assault the LTTE has moved its special commando units across the waterway into southern Pallai from their consolidated positions at Maruthankerni, Thalaiyadi and Muhavil.

According to latest reports from the field a large number of Sri Lankan troops have been killed and a huge quantity of arms and ammunition have been captured. Puthukaddu junction, a strategically important location in that sector has fallen to the LTTE fighters posing a major threat to the A9 highway between Pallai and Yakachchi. Heavy fighting is still raging in the area.